Whistling past the graveyard

Louis C.K. is OK with the suckiness of life 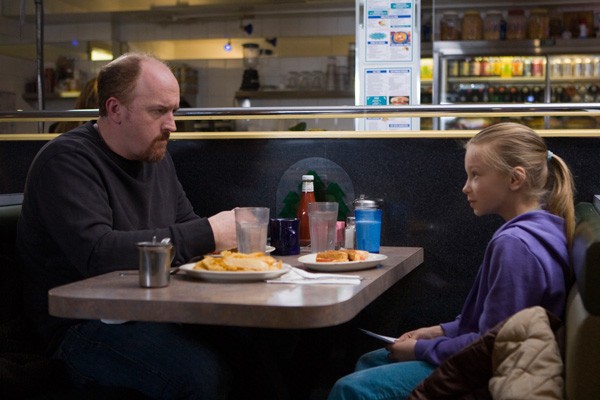 It's not groundbreaking to hear a comedian build a bit around one of the racist/homophobic/misogynistic impulses that flit through everyone's brain – flirting with taboo has been stand-up's stock in trade for decades. And calling out failure and weakness, not others' but their own, is bread and butter for the current crop of comedians – in some cases they revel in it (Dane Cook, Daniel Tosh); in others, hangdoggily own up to it (Brian Posehn, Patton Oswalt). A cavalcade of man-boobs, masturbation and various forms of moral hazard is paraded nightly on cable stand-up specials. But Louis C.K. neither flaunts nor taunts. He simply acknowledges his shortcomings, and that utter, resigned self-knowledge is the starting point for spiraling rants about … well, his man-boobs and masturbatory habits.

So how is it that his FX show, Louie, is the best thing on television?

Other shows come close, but none have the whole package. The League and It's Always Sunny in Philadelphia dependably drop oh-no-they-didn't shockers, but neither feels as real as Louie. (Sunny takes place in some surreal consequence-free bizarro world, while The League's sports-obsessed suburbanites are so bitterly miserable one wonders how they resist suicide.) The Simpsons, another family-centered show, possesses the same degree of deadeye realism, but that show is playing on a bigger stage – the Simpsons function as allegorical pawns to illustrate the fucked state of the world, not just one man's mess. Seinfeld's "no hugging, no learning" edict paved the way for Louie's lack of sentimentality, but revolutionary as it was, it wasn't able to break free of the laugh-tracked sitcom template. Ricky Gervais' Extras comes close to Louie's level of self-laceration, but where Gervais' Andy Millman spends each epsiode trying to extricate himself from the cringe-inducing situations he creates, C.K. neither hides behind an alter ego nor makes any attempt to escape the cringe.

Each masterful episode of Louie takes on a different facet of C.K.'s impotence (sexual or otherwise). Laced with generous wedges of his stand-up act, the show looses those aforementioned taboo-busting rants into the real world. Admit to smoking too much pot? Disrespecting your girlfriend? Questioning religion? Pfft. Try talking about how you hate your 5-year-old daughter. Not just riffing against a brick wall on the many reasons your 5-year-old is an asshole, not just cajoling the audience into admitting that, they, too find toddlers to be credulity-straining fuckwits prone to douchebag behavior – but scripting and filming, with a child actor, that behavior. Then flip the kid off behind her back. Then admit that, yeah, you know you ought to be saving for her future, but … you're not. C.K does all of this in the first five minutes of the second-season premiere. The first four episodes are a cavalcade of gut punches – brutal-hilarious run-ins with the usual bugbears: sex, kids, real estate, Joan Rivers.

These are not easy, secretly self-aggrandizing (aren't I a bad boy!) bits; this is radical honesty. And C.K. is in total control. Not only is the show based on his life, he's the director, the editor, the only writer, he oversees the music – and his deal with FX gives him sole script approval without network suits' input. That singular point of view enables the laser-sharp focus of each 22-minute opus. Like Monk at the piano, C.K. plays a note at a time rather than pouring out chords. Within the tight constraints of a half-hour sitcom, every word, every note struck, has to be true, and that's only possible when they're all coming from the same source.

Television is the last bastion of the quote-unquote American family (wake up, showrunners; that's not what America looks like anymore); if you have neither children nor frat brothers, TV comedy can feel like an alien landscape, toggling between kings of Queens and manic jackassery. It's a relief to find a sitcom lacking what Roseanne Barr calls "the rosy glow of middle-class confidence and comfort" and instead grounded in the most basic of situations – the bleak comedy of human error.