White House on the economic impact of refusing to expand Medicaid 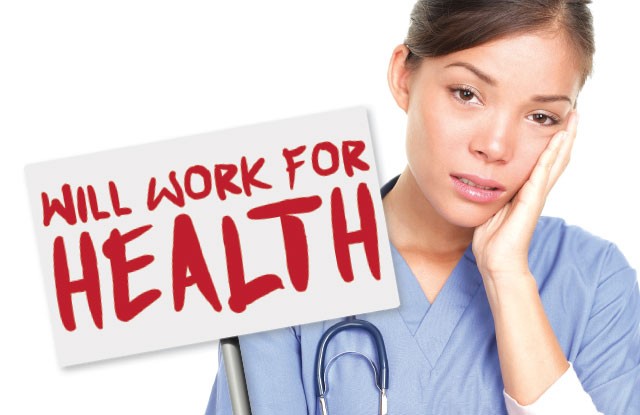 “I applaud the governors and state legislatures of both parties who have done the right thing and expanded Medicaid in their states, and I urge the governors and state legislatures who have not yet expanded Medicaid to put their constituents’ health over partisan politics and give millions more Americans the access to affordable health care they deserve.”

Amount Florida would receive from the federal government through 2016 if the Medicaid program were to be expanded. $51 billion would come to the state over the period of a decade

Will work for health care

While our minds were spinning last week over the U.S. Supreme Court’s decision to allow the crocheted crucifix cabal at Hobby Lobby to relieve women of their healthcare rights for fun and profit, another function of the Affordable Care Act – namely, its benefit to states should they expand their Medicaid programs and close the coverage gap – was getting a proper, if somewhat muted, hearing. On July 2, the White House via its Council of Economic Advisers unleashed the rather sad sounding “Missed opportunities: The consequences of state decisions not to expand Medicaid” report, which, as you might guess, simulates the wag of a fiscal and/or medical finger in the face of the conservative governors who refused to take part in the President’s absurd and corrupt scheme to make sure that everyone has healthcare. How very dare he?

It should be noted that there was more context to the report’s release than just the aggregate of your Facebook feed’s rhetorical explosions (microbursts that likely leapt from a Hobby Lobby boycott to being uninvited home for the holidays because we don’t talk politics over turkey, disowned spawn-thing). Only a day after the report was released – a report that hung its value largely around the 63,800 jobs that Medicaid expansion could have brought Florida over three years were the governor and legislators so benevolently inclined – news broke that national unemployment was down to 6.1 percent, capping off a record-setting 52-month growth spurt for the economy under President Barack Obama. Why, it was only in May that Tallahassee was bemoaning the loss of 18,000 jobs under Gov. Rick Scott’s more-money-for-the-rich regime. We got on the wrong side of the escalator!

Before you nod off at the sheer boredom of numbers being thrown at your face, there were plenty more numbers – some attributed to things that might make you feel – buried in the report. By the White House’s calculations, tens of thousands of Floridians living on the margins would have had a fair shot at mammograms, pap smears and treatment for mental health issues like depression. The Florida Community Health Action Information Network seized on the digits, with chief executive officer Leah Barber-Heinz issuing a statement basically demanding that Tallahassee wise up.

“Our lawmakers need to move forward with health care expansion to cover the over 800,000 Floridians stuck in the coverage gap,” she said. “Florida is throwing away new jobs and sending our tax dollars to states that are expanding, when instead we could be investing that money here at home.”

Surely those weighted fighting words would gain some traction among the wrinkle-free dress-shirt crowd of the Legislature, right? Hmm, let’s see what our accidental three-night-(keg)-stand House Speaker Will Weatherford grunted to the Tampa Bay Times on Wednesday. After pretending he had never seen us before in his life (except that one time at Hobby Lobby), he said, “based on the disastrous rollout of Obamacare, the lack of information on the federal budget impact and the ever-changing rules and regulations, I am skeptical of the job-creation numbers generated by the president’s office.” Weatherford, we should note, doesn’t know what the word “skeptical” means.

On the Senate side, Orlando’s own kinder, gentler incoming Senate President Andy Gardiner channeled Cher’s third single from the Believe album, saying, “Unfortunately, the federal government in their mandate is all or nothing. I think that’s one of the things that adds to the challenge.”

Everyone, apparently, is afraid they’re going to have their hands cut off eventually if they stick them in the federal cookie jar. So, basically, the White House continues to tout numbers consistent with its plan for full Obamacare enactment, while stubborn Republicans throw the same “skeptical” shade they’ve been shadowing for the past two years. Nothing’s changed. Nothing likely will.

“We can have a legitimate discussion about priorities and the fiscally responsible way to handle this,” White House press secretary Josh Earnest said, according to the Times. “But what is difficult for Republicans to explain is why they would block legislation that would expand access to health care for hundreds of thousands of Florida residents when it wouldn’t cost the state a single dime, at least for the next three years.”

Not as difficult as it should be, really.