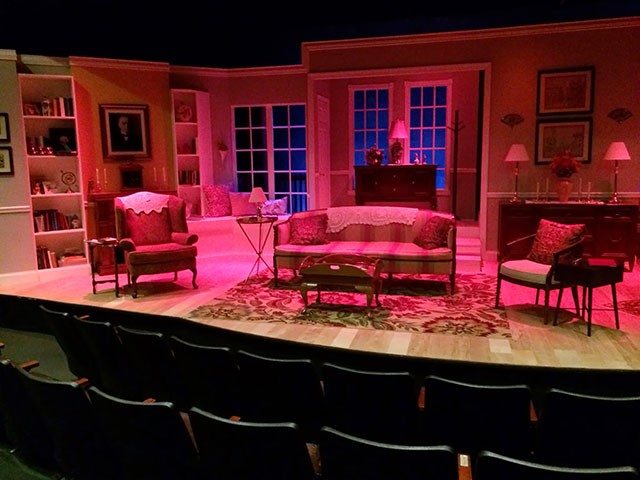 Two of Orlando’s newest theater companies – Cornerstone Theatre and Clandestine Arts – have kicked off 2014 by mounting a pair of the most popular American classics in the canon, which shows how influential my multiple 2013 rants against overly familiar scripts were. On the plus side, as a critic I now feel absolved from regurgitating synopses; if you’ve never heard of Edward Albee’s Who’s Afraid of Virginia Woolf? or Stephen Sondheim’s Sweeney Todd: The Demon Barber of Fleet Street, Wikipedia can educate you far better than I.

Instead, I can launch straight into the productions’ unique qualities. In the case of Cornerstone Theatre producer/director/designer Nicholas Murphy’s Virginia Woolf?, those start with his stunningly solid set, which transforms the Lowndes Shakespeare Center’s Goldman Theater into a handsome upper-middle-class midcentury home – from hardwood floors to crown molding, only a few anachronistic props mar the period setting.

The cast is led by Frank Jakes, who plays George as less an ineffectual intellectual than a florid ringmaster of misery. Angel Allen’s Martha, by contrast, isn’t a braying banshee but a pathetic victim of George’s sarcastic bullying. Since George is typically portrayed as the more reticent and sympathetic character, such a tonal shift is conceptually intriguing. But in execution, without a larger-than-life Martha to battle, George’s eyebrow-waggling histrionics unbalance Albee’s verbal boxing match, ironically undercutting the authenticity of his anger, which eventually erupts in awkwardly staged violence.

As Nick and Honey, the younger couple caught in George and Martha’s emotional crossfire, Chaz Krivan and Janae Riha acquit themselves honorably. Krivan lacks the “wave of the future” Aryan physique Albee calls for, but his floppy forelock and hangdog eye-rolling are employed to good effect as the debauchery unravels. And Riha has simpering Stepford Wife down pat.

Jonathan Whiteley’s lighting is distractingly non-diegetic and unsynchronized with stage movement, while the sound suffered nearly show-stopping flubs during my performance. But all flaws could be forgiven, if the show weren’t three hours and 40 minutes long (with two 10-minute intermissions). That’s 35 minutes longer than the recent Broadway revival, and 88 more minutes than the classic Burton-Taylor film. Suffice it to say that my seating companion, a Virginia virgin who alternated between nodding off and furiously checking the time, isn’t eager to experience Albee again any time soon.

As a producer, I’m of the opinion that to successfully stage a chestnut, you either need star power or a novel twist. Clandestine Arts’ producer/director/designer Derek Critzer has both for his version of Sweeney Todd at the Venue, recruiting well-known local veteran Stephan Jones to reprise the title role for his fourth time and tapping Ginger Minj (aka Joshua Eads-Brown) for a drag turn as Mrs. Lovett.

Cross-gender casting is one of many curveballs in Critzer’s madhouse interpretation of Sondheim’s murderous musical, which is framed by a chorus of asylum inmates freaking out in the audience’s faces. The production unfortunately isn’t as interactive as the preshow promises, but even without an iconic slamming door, the multilevel set so overwhelms the Venue’s modest stage that the cast nearly spills into the seats. Some directorial interpolations feel organic and appropriate, like Tobias (Jason Lee Blank, eerily effective as an overgrown urchin) anointing the characters with their defining props during the prologue. Others, like a balky barber chair and some unfortunate interpretive dancing, seem inspired by a Jersey Girl-esque grade-school play.

Ultimately, the leads’ talents overcome any unevenness in the overall production. Jones sang Sweeney’s role superbly, as always, and appeared to be genuinely enjoying himself during signature duets, though he sometimes seemed subdued and disconnected in ensemble scenes. Minj was much more than a gender-bending gimmick, putting aside her absurd eyelashes and Divine-worthy second-act outfit; she mined Lovett’s mix of mercurial mania and girlish neediness much deeper than Helena Bonham Carter did in the movie, and enunciated expertly in an accent to boot. Though Critzer’s staging is sometimes too ambitious for its own good, watching Jones and Minj gleefully devour “A Little Priest” was the most I’ve enjoyed that number since seeing Michael Cerveris and Patti LuPone tear through it on Broadway.