Why elections matter: A rundown of all the evil stuff being pushed through the Florida Legislature this session 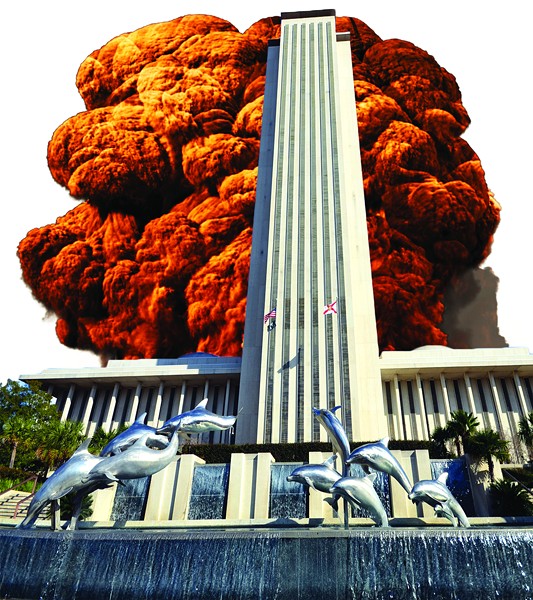 Quote of the Week: “Indeed, lawmakers seem more inclined to listen to industry groups that had nothing to do with the Amendment 1 campaign, such as Associated Industries of Florida, than to its backers, who won the public’s endorsement. It’s outrageous. But, sadly, lawmakers can get away with such arrogance. Most are in safely drawn districts that rarely expose them to a broad section of voters.”
– Tampa Tribune Editorial Board in a March 16 editorial

Ever get that feeling that you're flying down a slalom on a track constructed of razor blades that ends up in a blood-filled pool located somewhere in the middle of nowhere behind a mobile home? Oh, then you must have been paying attention during the third week of this year's legislative session in Tallahassee. While liberal opponents of backroom deals are frowning at the fact that much of the recent (mostly) hot-ticket social-issue legislation is the fruit of both an inactive electorate last midterm November – still think that mandatory elections are a bad idea? – and lamenting the fact that a supermajority means that a total of one Democratic bill (ONE!) has actually advanced through committee as of press time, we're going to be optimistic (cough) and hope that the oversteps on decency we're about to zip through below just make you want to care enough to vote next time? Maybe? Or call your representative? Maybe?

OK, it's possible, as some have accused, that we're just venting, because, you know, guns freak us the fuck out. As does that sinking feeling that Florida ought to be feeling after numerous reports that the state doesn't have long to live above the sea, especially in South Florida, where saltwater intrusion into drinking water supplies is already an issue and the preservation of the Everglades is, apparently, not important.

But this is not an election year, and like most not-election-years, the Republican supermajority brought to you by apparent electoral apathy is toeing the hardline, likely gearing up for the 2016 elections, which ... well, we'll talk about that later in the year.

Key to last week's disappointments was the seeming constitutional questionability of how the Legislature is choosing to treat a 75 percent "yes" vote on environmental Amendment 1, intended to ensure water quality and conservation. The House dove in headfirst with a bill, HB 7003, that would effectively remove regulations from farmers on all things preservation, because the farmers know better and "best practices" and all. But insult was added to liquid energy when the Senate chimed in with its budget goals that, not-at-all-suspiciously, stroked its Big Sugar friends and caved on Everglades restoration. All of this as Gov. Rick Scott's administration has been recently accused of demanding a mental evaluation and time off for a Department of Environmental Protection employee who dared mention "climate change." See you underwater.

It gets worse, though. On the social-issues front, Republicans have rediscovered their terrible, sharp tooth and started riding the backlash on increased LGBT and reproductive rights, even with some unexpected overlap. After some impassioned testimony, the House Government Operations Committee went ahead with their anti-transgender legislation, HB 583, which aims to make transitioning folk wet themselves, apparently – either that or suffer the indignity of risking a third-degree misdemeanor if they don't use public bathrooms representing their "biological sex." Sixty days of jail and a $500 fine for being yourself, then. Sounds like important legislation in these troubling times.

On top of that, a Republican bill, PCP HHSC 15-03, designed to allow the increasingly privatized trade of childhood adoption to operate (with taxpayer money! Church and state!) under the auspices of the religious biases of said companies, is trying to circumvent the 2010 state appeals court ruling that gay adoption is legal. It easily cleared the House Health and Services Committee last Thursday, even after there was speculation that it was both unconstitutional and discriminatory (say, a Jewish woman walks into an adoption agency and is greeted by a Catholic: no dice).

"This gives tax payer funded adoption agencies a license to discriminate against qualified parents based on their own religious objections unrelated to parenting or to the needs of the child," Equality Florida representative Carlos Guillermo Smith says. "Now is the time Florida should be encouraging the adoption of needy children by loving families, not making things harder."

Another Republican bill, HB 633, aims to force women to endure a 24-hour waiting period to receive an abortion, because it's not emotionally disturbing enough to endure the violence of protesters outside a clinic just once. That bill is pretty close to the House floor, according to CBS, though the milder Senate has yet to assign it to anything.

How's this Republican supermajority thing working out for you?

Well if you're one of the nearly one million people falling into the much-publicized Medicaid gap – or even just medically needy, or even just a hospital in need of public funding – maybe not too well. Just like in 2013, the House and Senate are clashing over funding for some kind of Medicaid expansion so that the state can retain its Low Income Pool health care funding. The Senate wants a private market in Florida that draws down from the Affordable Care Act; the House doesn't want to talk about poor people. Don't expect much when the Sine Die hanky drop comes around at the end of session.

Meanwhile, last year's reasonably popular (58 percent via constitutional amendment on the ballot!) medical marijuana bill has yet to be assigned to a committee. A bill that is playing the backwards logic that more guns on college campuses will make for less violence is flying through like a bullet. Once again, the Legislature is going after the Florida Department of Corrections in a downsizing volley that its sponsor, House Appropriations Chairman Richard Corcoran, R-Trinity, is claiming has nothing to do with privatizing prisons, but more to do with how shitty the department is in total as it has become a "monstrosity," the Miami Herald reports. That sounds nice. The House wants to drastically decrease the size of the agency, but without the oversight that the Senate is suggesting. Nothing could possibly go wrong.

State Rep. Randolph Bracy, D-Orlando, "felt that the Department of Corrections shouldn't be penalized without the proper opportunity to be fully funded and if they are understaffed and overworked, how about we consider providing the staff with the proper environment in the prison system without penalizing them with an oversight commission," the Herald reports. Bracy just wants to put the horse before the whole prison corruption cart, see?

"What you won't see, though, is anything about our Legislature working to improve our right of access, to create an effective enforcement mechanism so we're not forced into court every time there's a violation of our right of access, to ensure we have affordable and timely access to public records, that we're not shut out of public meetings," writes First Amendment Foundation President Barbara Petersen in an op-ed for the Sun-Sentinel.