Will there be an independent investigation of Ibragim Todashev shooting? 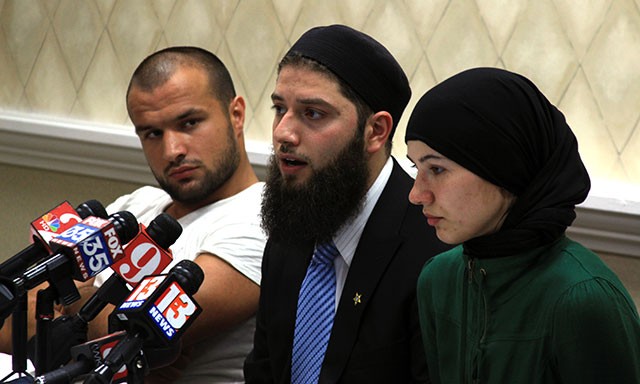 On May 29, the Council on American-Islamic Relations held a press conference at an International Drive hotel to demand a private investigation of last week’s deadly shooting of an Orlando man by an FBI agent. As has been widely reported, the FBI turned up at an apartment on Peregrine Drive in the early morning hours of May 22 to question Ibragim Todashev about his acquaintance with Boston Marathon bombing suspect Tamerlan Tsarnaev. At some point during the questioning, an altercation took place – reports from law-enforcement officials about what exactly happened are vague and conflicting – and Todashev was shot to death by one of the agents.

Hassan Shibly, executive director for the Florida chapter of the Council on American-Islamic Relations in Tampa, says that he learned through anonymous “intermediary” sources that Todashev was unarmed when he was shot. “He was shot seven times and once in the head,” Shibly said.

After the news conference, Khusen Taramov – a friend of Todashev’s who was at the apartment while the questioning was taking place – showed photos of Todashev’s body that he said were taken at an Orlando funeral home after the medical examiner’s office released the body to Todashev’s family.

Todashev’s widow, Reniya Manukyan, was also at the press conference. Although the FBI insists Todashev confessed to taking part in the Sept. 11, 2011, murder of three men in Waltham, Mass. – a crime that Tsarnaev has now been tied to – she said she finds it difficult to believe her husband would ever have conspired with Tsarnaev to commit a violent act. In fact, the Council for American-Islamic Relations says it has proof that Todashev was not even in the Boston area on the date those killings took place.

Manukyan and Todashev were married for three years. They lived in Boston, where she said Todashev knew Tsarnaev casually. She said they were never friends but that they “went to the same gym and text-messaged each other.”

She said this might be why her husband was targeted for questioning.

“They probably found his phone number in his phone book,” she said. “After Ibragim got his knee surgery, he [Tsarnaev] checked on him to see how he was doing.”

When Manukyan was asked about her feelings toward the U.S. government, she said she bore no ill will – in fact, her mother, Elena Teyer (who was also at the press conference), has served in the U.S. Army as a pharmacy technician for more than five years. She said she joined to make the pathway to citizenship easier for her and her children.

“I heard about the news while I was at Fort Stewart,” Teyer said. “I drove as fast as I could from Savannah to Orlando to be with [Manukyan].”

Teyer, Taramov and Manukyan were all interviewed by the FBI on the day of the shooting – Teyer in Savannah and Manukyan in Atlanta.

Taramov said that the FBI had been following him and Todashev in unmarked cars, like Nissan Maximas and Ford SUVs, for months. “Since day one, they have been following us,” he said, but added that Todashev was just as surprised as the rest of the world the day he learned that Tsarnaev was implicated in the Boston Marathon bombing.

“He [Todashev] said to me, ‘I just found out that the Boston bomber was Chechen. Can you believe it? I can’t believe I knew the guy, too,’” Taramov recalls.

Despite the inconvenience, Taramov says he and Todashev were cooperative with the agents. “I trusted them,” Taramov said. “They told me that no one would get hurt; they wanted to just ask questions.”

However, Todashev had become exhausted by the questioning over the past few months.

“He told me that he was so tired of it,” Taramov said. “The FBI asked him to come down to the office for the questioning, but he didn’t feel like going in, so he asked them to come to his home.”

Shibly said that Todashev was asked to cancel a plane ticket for what the agents said would be his last interview.

Shibly said that someone should examine whether the federal agents violated Todashev’s Fifth and Sixth Amendment rights – which hold that no person may be held to answer for a capital crime without the indictment of a grand jury and that all criminal suspects have the right to a fair and speedy trial before an impartial jury – in handling the case.

“We will be requesting the U.S. Department of Justice further investigate what happened on the day of the shooting,” Shibly said. “We also want look at if there was excessive force used by law enforcement.” (UPDATE: CAIR has sent a letter to the U.S. Department of Justice's civil rights division, requesting an investigation. Read the letter here.)

Officials at the FBI have been tight-lipped about the incident, and said in a statement that the agency is conducting its own review, the findings of which will be presented to the Shooting Incident Review Group, which consists of members of both the FBI and the U.S. Department of Justice.

When asked for his opinion on the condition of Todashev’s body, Dr. Gary Utz, Deputy Chief Medical Examiner for Orange and Osceola counties, said it’s the policy of the office not to discuss cases under active investigation.

“The autopsy report has not yet been finalized and law enforcement has requested that the results not be released pending their investigation,” he said.

Anonymous federal law-enforcement sources quoted in the national news media said Todashev became violent while writing a confession statement acknowledging that he helped Tsarnaev commit the 2011 triple murder. In early accounts, they said he might have been armed with a knife; more recent accounts say he could have been armed with a broomstick, a metal rod or even a samurai sword.

Shibly confirmed there was a sword that hung on a wall at Todashev’s apartment, but he questions why the FBI wouldn’t remove it from the room during the five-hour questioning if they thought it was a threat.

When asked whether it was true that Todashev was writing a confession to the triple homicide that FBI agents say he helped Tsarnaev commit, Shibly could not say. “Dead men can’t tell tales,” he said.