by William Eggleston, Collection of the University of Mississippi Museum and Historic Houses, gift of Dr. William R. Ferris. 'Untitled,' 1973

THE BEAUTIFUL MYSTERIOUS: THE EXTRAORDINARY GAZE OF WILLIAM EGGLESTON

The Mennello Museum of American Art opens a show this week by William Eggleston, America's most famous color photographer and widely acknowledged as a living national treasure.

It wasn't always so; before Eggleston's 1976 show at the Museum of Modern Art, color photos were seen as tacky, the purview of garish advertisements and tawdry snapshots. "Real" art photographers used black and white, to emphasize the austere balance of line and shadow. Naysayers were put in their place, however, when Eggleston's brilliant dye-transfer prints became wildly popular and influenced subsequent generations of photographers.

That intensity of hue belies the seemingly throwaway subjects, lending a hallucinatory significance to rusty gas station signs, tattered fabric on a clothesline, a supermarket cart. As a lifelong resident of the South, Eggleston shot plenty of rural signifiers, though he is in fact a moneyed bon vivant from a well-established family; much like William Faulkner, to whom he's often compared, Eggleston both perpetuates and explodes the myth of Southernness – the Spanish moss, the dilapidated barns, etc. As Mennello curator Shannon Fitzgerald puts it, he creates "a distinct Southern vernacular without nostalgia or sentimentality." 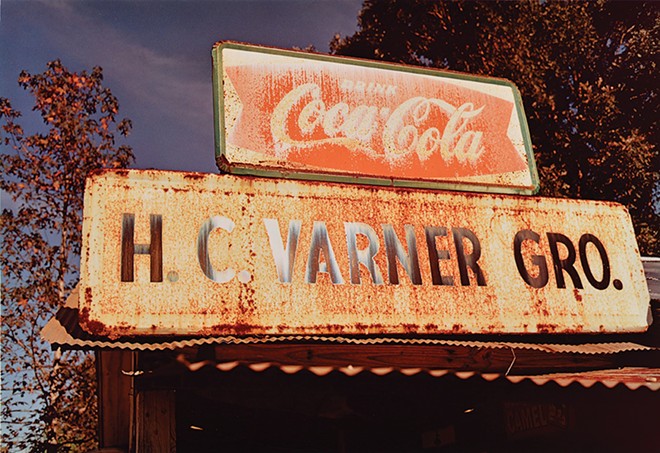 In his recent book examining photography, The Ongoing Moment, critic Geoff Dyer says William Eggleston's photographs look "like they were taken by a Martian who lost the ticket for his flight home and ended up working at a gun shop in a small town near Memphis." That faintly implied menace (an outsider, a gun shop) is borne out by the fact that the curator of this show is crime novelist Megan Abbott, who encountered Eggleston's work when she was the John Grisham Writer in Residence at the University of Mississippi. And perhaps Abbott's noir sensibilities account for the fact that The Beautiful Mysterious, a show of work by our pre-eminent champion of color, is half comprised of black and white photos.

It's a rare chance to examine Eggleston's work without being seduced by the sheer beauty of his luscious color sense – if only all those sniffy critics from the 1970s who couldn't see past it could examine these prints, they might see the genius of Eggleston's compositional style. The peculiar and nonchalant balance in which seemingly random arrangements reveal, upon examination, a perfectly inevitable interior harmony is the basis of Eggleston's fandom, who circulate the (apparently true) legend that "Bill just shoots one." No one would compare his work product to Henri "The Decisive Moment" Cartier-Bresson's, yet Eggleston achieves the same shoot-from-the-hip perfection, eccentric though his choices of subject may seem. 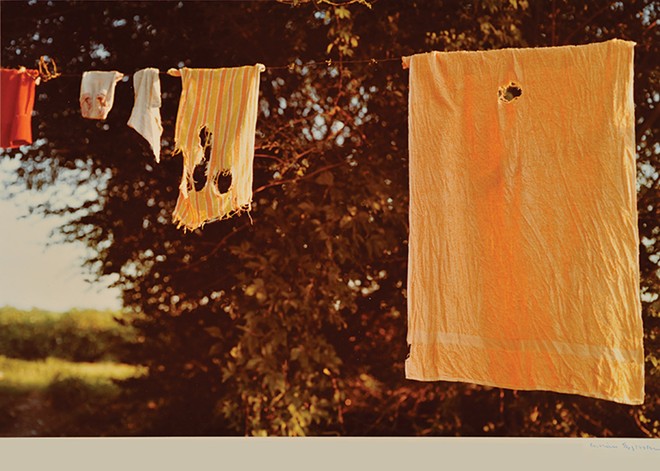 How gratifying to see the Mennello making moves toward exciting and significant contemporary art, made by living artists. City-funded facilities, not under the same immediate impetus private galleries are to earn money by selling, should always take some risks. Showing challenging work (instead of art that looks good over the couch) fulfills that taxpayer-supported mandate to expand visitors' visual tastes and inspire future artists; we can only hope for more to come.