Words get in the way 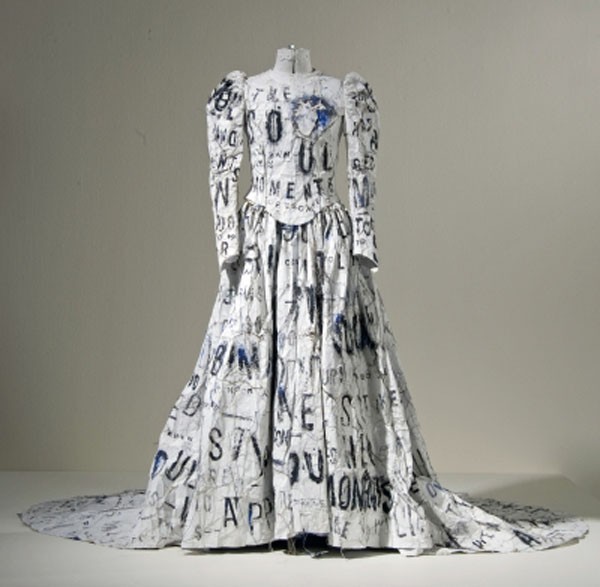 Art shouldn’t have to tell you to think. It should make you think.

In fact, the thinking should come involuntarily. Sometimes uncomfortably. Sometimes against your will. That’s part of the thrill and the pleasure of going to a good art show. So it always comes as something of a disappointment to browse a thoughtfully curated exhibit that has the potential to challenge you but then spoils the experience by trying to not only tell you to think, but also how to think and what to think about what you’re viewing.

That’s the frustrating part of the Orlando Museum of Art’s new show, XX-XY/Gender Representation in Art, a collection of paint- ings, installations, photographs and art objects gathered from private and public collections and assembled in the museum’s main gallery to examine the role of gender in art.

The show features works both familiar (Andy Warhol’s screenprinted “Marilyn Monroe” adorns a far wall) and lesser known (Haitian artist Edgard Jean-Louis’ fascinating sequined portrait “Erzulie Danthor [Black Madonna Virgin Mary Haitian Drapo]”), organized into four themes: magnetism, domesticity, power and enhancements. To develop the show the museum worked with professors from the University of Central Florida’s departments of philosophy and women’s studies, both of which will incorporate the exhibit into a curriculum on gender studies. The themes, which are elaborated upon in statements from the curation team – as well as the statements about many of the individual works in the show – feel more like college-textbook treatments of their subjects than unobtrusive elements meant to subtly enhance the show. Do viewers really need an explanation of “power” or “magnetism” to understand how the works gathered under those topics illustrate them? Probably not, and the rhetorical questions and analysis is often more distracting than useful.

Despite this bit of ham-handedness, though, the show contains some truly fascinating pieces.

Take, for instance, Flo oy Wong’s “Gim Nuey: Ho Meong Suey,” a featureless rag doll made of white cloth and adorned with ribbons, beads, pins and feathers. On one side, the figure’s decorations are gilded – shiny, golden pins are stuck in its face, and beads are strung in patterns along its body. The effect is gaudy, self-conscious and a little painful, though not in an entirely unpleasant way. The other side of the doll is covered in black and blue feathers, ribbons and beads, arranged around the face to create a jarring, angry scowl. The placard below the piece says that the artist was the sixth unwanted daughter in her traditional Chinese family, and this doll was created in response to her upbringing. That information alone would be enough to allow viewers to ruminate on how the two sides of the doll relate to one another, but once again, the organizers of the show spell it out for viewers, explaining  that “the false facade of Wong’s doll hides an ugly truth.” But both facades – golden and black – are ugly and neither seems to actually be doing a good job of hiding truth. If anything, both accentuate it: The black and blue bruised side of the doll could easily be the face of internalized conflict and rage; the golden side could represent a different kind of discomfort – the kind that comes with dressing pain and self-consciousness in pretty but insincere trappings.

Likewise, a misshapen  beaded necklace by Baltimore artist Joyce Scott is a complex mess of bright beadwork into which a few simple patterns and skeletons are woven. (The placard beneath it urges viewers to think about what kind of statement the necklace makes about life.) Lesley Dill’s “Dada Poem Wedding Dress” is a long-sleeved white paper dress decorated with typography: words of the poem “The Soul Has Bandaged Moments” by Emily Dickinson. From a distance, it looks ghostly and demure, but upon closer inspection, one can see the places where the dress – which was torn apart in 1994, word by word, during a charity ball for AIDS organizations – has been ripped to pieces and sewn back together again. Its surface is crumpled and reveals the staples and strands of thread that hold it together.

A massive, untitled wood cut by artist Kerry James Marshall is the highlight of this show, though. It illustrates a quaint-looking domestic scene in pastel tones, at the center of which are six adult black men. In one panel, three men sit on a floor engaged in what seems to be an emotional confrontation or discussion. In another panel, an older man wielding a teapot is poised to pour a cup for another man sitting on the couch, while a third man sits on the floor looking on. There’s nothing inherently unusual about the mundane scene, but something about it is unsettling: Is it that there are no women in this domestic scenario? That the men all wear somber looks on their faces and seem ill at ease? Or is it simply that viewers are not accustomed to seeing groups of black men portrayed in these kinds of intimate moments of personal interaction? Whatever the reason, the effect is haunting and perhaps says more about gender representation in its own impenetrable way than a whole host of explanatory materials about the topic ever could.