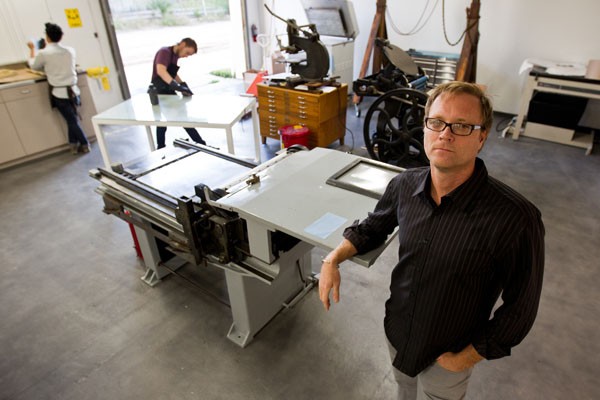 Across the street from the old Amway Center downtown, tucked inside an institutional-looking brick building, an unobtrusive printing operation with a big reputation is quietly turning out some unique items. Flying Horse Editions, a 20-year-old nonprofit that publishes limited-edition art objects and fine-art books, is located here in the University of Central Florida’s Center for Emerging Media. Flying Horse uses both vintage printmaking tools – such as a centuries-old hand-operated letterpress machines – and digital technology to create highly  collectible reproductions of images created by renowned artists.

Though the operation has been around for a couple of decades, few people in town are aware of Flying Horse’s growing prestige in the art world. Last year, it moved downtown from its long-time location at the Central Florida Research Park on the east side of the city; the move could help raise the small press’ profile a bit – but its low profile may be what makes it so special.

According to Flying Horse’s director, Theo Lotz, the press is exclusive by design. It’s funded entirely by donors who pay a $2,500 annual membership fee to belong, and in return each gets a copy of the works produced by Flying Horse Editions. Membership is limited to 25 donors, and although the dues may seem steep, Lotz says there’s a waiting list of people who want to join.

Lotz selects the artists who work with the press and then helps them come up with a concept for the press to produce. It can take months to develop an idea, Lotz says, and up to a year and a half to finish one project.

Earlier this year, Flying Horse partnered with noted William Blake scholar Michael Phillips of the University of York in England. For the past 20 years, Phillips has been trying to determine how the noted 18th-century British poet, painter and printmaker created his famous relief etchings. Lotz worked with Phillips to produce 18 plates inspired by the illustrations in Blake’s books the Songs of Innocence and Songs of Experience.

The Blake project was well received: “It’s gone into the British Library in London and the Morgan Museum in New York,” Lotz says. “The New York Public Library bought it, too, and the Library of Congress [in Washington, D.C.].”

Lotz says he’s very interested in working with nationally emerging artists, and he sees his job as helping artists “push their own work in a way they wouldn’t be able to do if they didn’t come here.” He worked with James Siena from New York, a painter who uses a mathematical system to draw his abstracts, on a series of unbound prints that Lotz says might be replicated in a subway station in New York.

“The subway wall will be black and inset with white square tiles showing how [Siena’s] red-and-black pattern was built up,” Lotz says. “The first tile, or page, would have one element, and as you move past it, the next elements will be added, tile by tile, so viewers will see the entire image develop, like a flip book.”

Lotz, 44, took over as director of Flying Horse approximately two years ago and still teaches art classes at UCF. Previously, he was the curator of the UCF Gallery and worked for the Florida Art in State Buildings program. He also has served as curator for the Cornell Fine Arts Museum. His father, Steve Lotz, was the chairman of the art department at UCF years ago.

On a recent visit to Flying Horse, Lotz is leaning over a Vandercook letterpress, working on a project for artist Kristopher Benedict based upon his interpretation of French writer Jean de la Fontaine’s fable about a rat. The casual attitude of Lotz and his skeleton crew – three staffers, eight interns and several master printers who are used on a contract basis – defies the weight they carry on their shoulders to achieve the quality their collectors demand.

Lotz has a passion for architecture as well, and he helped design Flying Horse Editions’ spacious, minimalist production studio, which houses odd-looking 19th-century presses and typesetters – some of them antiques and some of them modern.

Part of the room is used for production, and another area serves as exhibition space for the artists. It feels like an industrial warehouse with exposed ceilings and bright white walls that look like they glow under the natural light that pours through the windows, strategically placed to catch the sun. From the hallway outside the studio, there’s a bank of windows that allow those passing by to watch what’s going on without interrupting the technicians at work – kind of like watching fish swimming in an aquarium.

“I always wanted it to feel like a gallery and wanted to be sure the fine art looked good, [but] it always had to be a production space too,” Lotz says. “Because I think of this as a research space, I always like to push the boundaries.”