You’ll fancy the no-frills cuisine at Taste of Yucatán 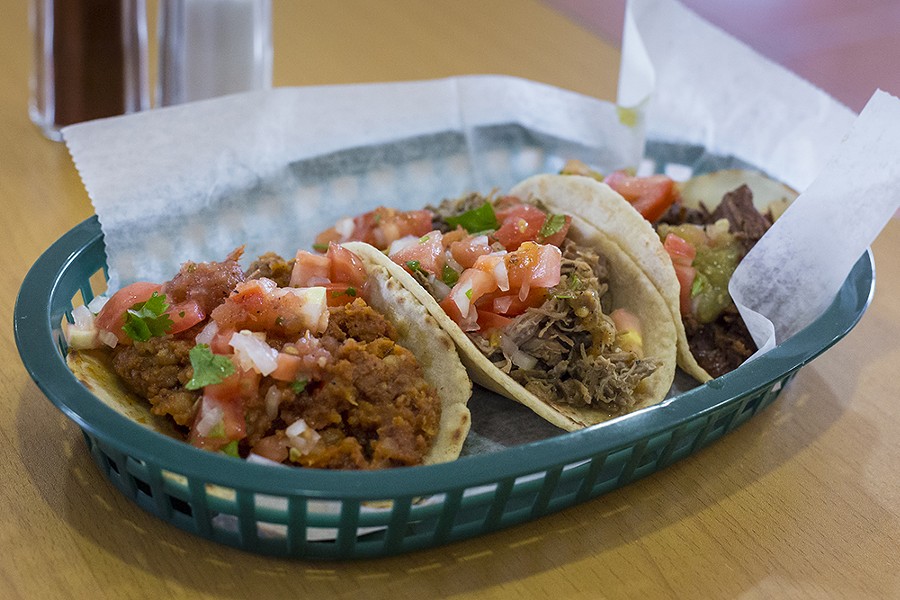 We weren't exactly hungry on entering the familiar confines of the Taste of Yucatán, a space that's seen a revolving door of eateries from the much-acclaimed Scandinavian resto Two Fat Chefs (remember them?) to the not-so-acclaimed Church's Chicken. But that was before we sauntered up to the counter and started chatting with owner Joal Rodriguez, who talked about the menu and his house-made salsas and hot sauces in great detail.

I could almost feel a space being made in my gastrointestinal tract as he spoke of panucho – deep-fried, bean-stuffed tortillas – and cochinita pibil – pork rubbed with achiote, marinated in sour orange, then slow-roasted for eight hours in a banana leaf. When he pointed to a Styrofoam container of ruddy and oily salsa macha, the infernal sauce fashioned from smoked chile de arbol and sesame seeds, the mental purging of the burger I'd devoured a few hours earlier was all but complete.

And that combination – panucho ($1.20) plus pibil ($1.99) plus salsa macha, along with a spoon of diced onions marinated in sour orange, proved utterly intoxicating. "DAMN that's good," exclaimed a New Yorker friend of mine visiting for the weekend, and so began our excursion into the fare of the Mayan peninsula.

Patrons gazing up at the menu monitors tend to take awhile to select their "presentation" (taco/quesadilla/torta/rice bowl) and "filling" (meat/veg) of choice, but it's easy to forget the annoyance after tearing into a deep-fried salbute (a panucho without the bean stuffing) filled with spiced barbacoa ($2.70). Slathering a mango-habañero salsa on the crispy "Mayan taco" elevated its already lofty status in our eyes (and mouths). The habañero pepper is an essential element in Yucatecan cuisine, and is featured here in another salsa blended with tamarind. That liquid lure helped counter dry pollo adobado (chicken marinated in red chiles, garlic and vinegar) in another deep-fried number ($2.40). While we could've easily sustained ourselves on these Mayan tacos alone, we had our eyes on one of their doughy tortas.

"You MUST have it with the al pastor," Rodriguez insisted, and the man was right. The porky bits, Oaxacan cheese and avocado inside the doughy-soft mini baguette known as bolillo made the sandwich a filling one. At one point, upon feeling the bloat, we set the bread aside and just pecked at the spicy-sweet meat.

I tend to shy away from quesadillas (flour tortillas are not my favorite), but I couldn't find fault with these triangles layered with rajas poblanas ($3.35), a mélange of sliced poblanos, mushroom, onion, corn and cream. The "made-to-order" guacamole ($4.50), on the other hand, left us underwhelmed – it was gritty and mushy, and too limey for our liking, plus the chips lacked any semblance of flavor. Swigs of Sidral Mundet ($2.20) and Mexican Coke ($2.20) were enjoyed between bites, but that carbonation only served to further swell our waistlines. So it's probably a good thing they ran out of dessert. For that matter, they also ran out of pavo (turkey), a common sight on plates in the Yucatan, as well as vaporcito, a ground beef tamale wrapped in banana leaf that we were anxious to try.

Rodriguez plans to introduce beer and wine, as well as additional menu items from his native land, next year. So while cultural pluralism may get Trumped in 2017, we can take heart knowing that in the Taste of Yucatán, this city has torn down another culinary wall.