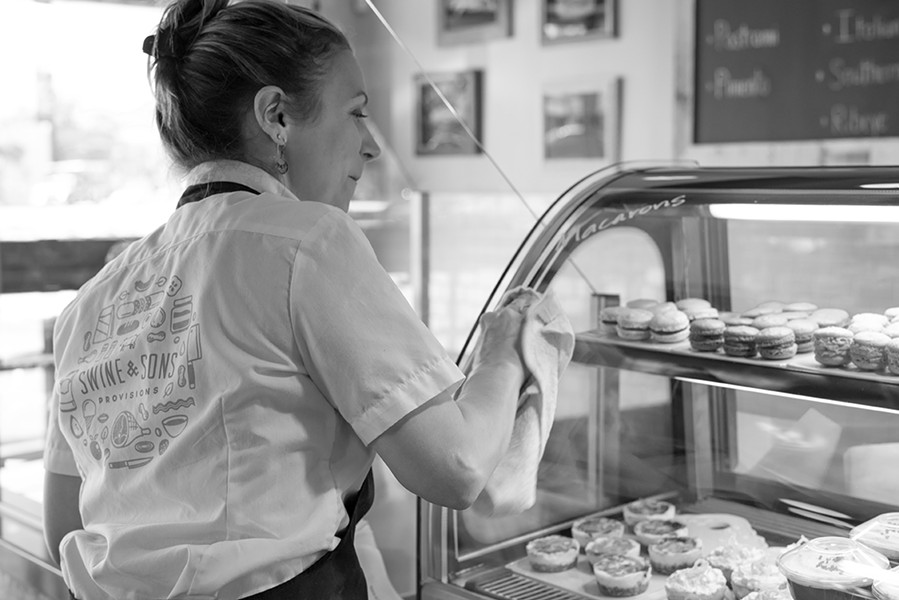 Ever since the Petrakis empire expanded to include the sandwich and provisions shop Swine & Sons, located next to Cask & Larder in Winter Park, foodies have been abuzz about the husband-and-wife team behind the counter. Rhys and Alexia Gawlak are the lifeblood of the place, and those creamy blueberry goat cheesecakes and robust macarons and pillowy carrot muffins? That's all Alexia.

Since her graduation from the Culinary Institute of America in Hyde Park, New York, in 2004, Alexia has held positions in some of Orlando's most-talked-about restaurants. Her early career was shaped by the farm-fresh-food concepts of Melissa Kelly at Primo at the JW Marriott Grande Lakes, where she began her career after graduation. Not a bad place to hone chops. Gawlak then moved over to work under Brandon McGlamery at Luma, and with the opening of the Ravenous Pig in 2007, she served as James and Julie Petrakis' sous-chef.

Chef Gawlak cites cooking with her own children as an exciting part of her learning and development as a chef, and often takes the lessons and experiments (and attitude) she gains from spending time with her kids in her home kitchen to her work in the professional kitchen. "Cooking with them allows me to remember to not take food so seriously, and is a nice break from having spent so much time in the kitchens of fast-paced, upscale restaurants," she explains. "I've also found that it has lightened up my food philosophy and made me more easygoing."

The house-cured charcuterie at Swine & Sons is a paramount example of what Gawlak feels most passionately about: food that comes from food. "We are aiming to make honest food more accessible at home," she explains. "There's no stuff here you could just make out of a box."

The ideals Gawlak gleaned from her time at Primo still pervade her menu development and approach, and she cites Kelly, along with local chef Kathleen Blake (who has also been instrumental in bringing farm-to-fork eating to the City Beautiful) as among her biggest culinary influences. "What's available seasonally is what's most inspiring to me," she says. As summer approaches, she anticipates adding Zellwood sweet corn ice cream to the pint lineup at Swine & Sons. We can't wait.